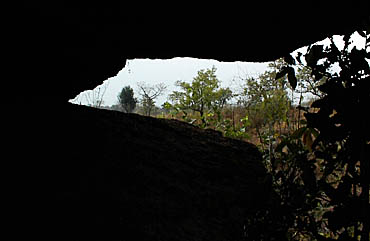 This photo by ISU anthropologist Jill Pruetz shows the view from inside the cave in Senegal where she found evidence of chimpanzee use.

AMES, Iowa -- Chimpanzees in Senegal apparently have much in common with our earliest human ancestors.

A month after Iowa State University Assistant Professor of Anthropology Jill Pruetz reported chimpanzees at her Fongoli research site are using spear-shaped tools to hunt, her new study indicates those same chimps are also seeking shelter in caves to get out of the extreme African heat. The National Geographic Society-funded research is the first to document regular chimpanzee cave use.

Pruetz' paper, titled "Evidence of Cave Use by Savanna Chimpanzees (Pan troglodytes verus) at Fongoli, Senegal: Implications for Behavioral Thermoregulation," will be published in an upcoming issue of Primates, a professional journal.

The paper reports that the chimpanzees' cave use was based primarily on indirect evidence -- feeding traces, feces and hairs -- gathered from one cave from January through December 2004. Supplemental data from observational records was also collected from May 2001 through March 2006. Pruetz has also witnessed the chimps entering and exiting the cave.

"I talked about it (chimps using caves) at a meeting in Japan several years ago. I just kind of reported it and everyone was amazed," she said. "They thought it was great and nobody had ever heard anything like it, except that Jane Goodall actually came up to me after the talk and she said that she heard an incident in Mali where someone was doing a chimp survey and they surprised a bunch of chimps coming out of a cave. But that's the only other instance that anyone, as far as I know, has ever heard of it."

In the paper, Pruetz concludes that the chimps' cave use is a response to heat at her Fongoli research site. She collected data on temperatures within Sakoto cave -- the largest cave within her site -- as well as the different habitats used by chimpanzees, such as gallery forest and woodland.

Her research found that chimps primarily use Sakoto cave as shelter during the hottest and driest times of the year, from October through May. The cave is several meters deep and located at the head of a shallow ravine, which was formed through water runoff from a plateau. Between 2001 and 2004, average annual daily temperature within the Sakoto cave was 24.2 degrees Celsius, compared with 29.6 degrees in the woodland habitat and 24.6 in grassland habitat -- both located approximately 30 meters from the cave and at the edge of the Sakoto ravine. Pruetz attributes the lower grassland temperature to wind. In the Sakoto gallery forest habitat approximately 20 meters from the cave, temperatures averaged 26.4 degrees Celsius.

"It seems very much cooler when you go into the cave, but I wanted to make sure I took temperature measurements in the cave and different habitats," said Pruetz. "It is significantly cooler in the cave and the only time they (chimps) use the cave is during the dry season when you have the hottest temperatures outside.

"They're (chimps) just using it as a way to avoid the heat," she said. "They just lie in there and rest. They'll bring food in and eat it in there, and groom. They sort of just hang out and relax."

Pruetz wrote in the article that maximum temperatures may be a more important measure of heat stress to primates than average temperatures. And that stress may be what's driving the chimps into the caves, although the explanation may not be that simple.

"While cave use by Fongoli chimpanzees appears to correlate with temperature, a number of factors probably work in association to influence this behavior, underscoring the complexity of the relationship between climate, habitat, and the behavior of hominoids inhabiting a dry, open environment," she wrote.

But maybe it shouldn't be so surprising that chimpanzees are using caves after all.

"It shouldn't be surprising that chimps are using caves," said Pruetz. "If you look at the scientific name of the chimps, the species name is troglodytes, which means cave-dwelling."

Pruetz will return to Senegal in May. She and her Iowa State graduate students plan to measure relative humidity in the different habitats used in this research.

Jill Pruetz tells about famed primatologist Jane Goodall coming up to her after a conference talk in Japan.

This web page requires at least version 8 of Macromedia/Adobe's Flash Player. This software plugin is available for free from the Adobe Download page.

Iowa State University Assistant Professor of Anthropology Jill Pruetz authored a paper titled "Evidence of Cave Use by Savanna Chimpanzees (Pan troglodytes verus) at Fongoli, Senegal: Implications for Behavioral Thermoregulation," which will be published in an upcoming issue of Primates, a professional journal. It is the first study to document regular chimpanzee cave use.

"They're (chimps) just using it as a way to avoid the heat. They just lie in there and rest. They'll bring food in and eat it in there, and groom. They sort of just hang out and relax."