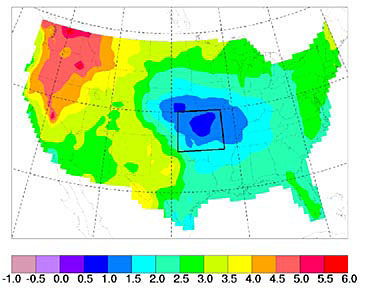 This image shows how much daily summer high temperatures are expected to increase from the 1990s to the 2040s, according to a climate model prepared by the Iowa State University Regional Climate Modeling Laboratory. The model suggests summers will be warmer across the U.S., but the central part of the country will warm less than the rest of the country.

"There is no question now that the climate is changing on a global scale," says Takle, an Iowa State University professor of geological and atmospheric sciences and agronomy. "The evidence is so overwhelming."

But what does that mean on a smaller scale? How are greenhouse gases changing the climate in North America? In the United States? In Iowa?

After all, "You and I are not affected by a few tenths of a degree of temperature change on a global scale," Takle said.

The three have worked together on climate studies for 15 years. And now they've joined an international group of scientists collaborating on the North American Regional Climate Change Assessment Program. The assessment program is led by Linda Mearns, a senior scientist at the National Center for Atmospheric Research in Boulder, Colo. The National Science Foundation is funding the Iowa State work on the project with a $353,000 grant.

The project calls for six teams of researchers (four from the United States, including the Iowa State group, one from Canada and one from Europe) to run their own regional climate models using at least two sets of identical data from two research groups studying global climate change. The research groups will see what their models say about regional climate change and compare the results. Ultimately, the researchers will create data sets that will help them study the impacts of climate change on a continental or even statewide scale.

Takle said the Iowa State research team has looked at Iowa climate data from 1975 to 2000 and observed some trends:

If those trends continue, Takle said climate change in the American Midwest could be good for agriculture over the next 10 to 20 years. But researchers are looking for more answers as they develop their regional climate models and run their computer simulations.

The research teams started working on the climate change assessment program about 18 months ago. The first task was to develop methods to manage and share data.

Gutowski said the research groups have moved on to testing their models by running them with climate data from 1979 to 2004 and comparing the results to what actually happened. He said the models represent conditions in the middle of the atmosphere very well, but have a harder time showing the distribution of summer rains.

The research groups are now preparing to use data from global climate models to run climate simulations for the years 2040 to 2070.

Arritt said the results of those simulations will give researchers a good idea about the range of possibilities for climate change across North America. He also said it's a tremendous boost for researchers to work with six different climate models and multiple sets of data.

"As you know, no simulation or forecast is perfect," he said. "By running a lot of different simulations we can see how wide the window is."

And then researchers can look at averaging the results to get a more reliable forecast of what kind of climate North Americans can expect by mid-century, Arritt said.

The models could have something to say about Iowa's weather, too.

The Iowa State team is working with a model that has grid points every 30 miles, Takle said. That works out to about one point per Iowa county. That should provide a pretty good picture of the state's future climate.

And that's some valuable information for all of us.

"If the climate is changing, you can't stop it over the next 50 years," Takle said. "What's coming is coming and we better be prepared to adjust to it."

Iowa State University researchers are part of an international project that will run computerized climate models to see how climate change may affect North America.

"If the climate is changing, you can't stop it over the next 50 years. What's coming is coming and we better be prepared to adjust to it."