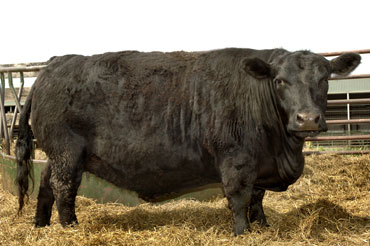 Long head dwarfs, like this one called Mini Moo at Iowa State's Beef Nutrition Farm, may be a thing of the past with James Reecy's new test for the mutation.

AMES, Iowa -- "If this technology is adopted by producers, in theory, we should never see another case of this form of dwarfism."

That is how James Reecy describes the possibility of ending long head dwarfism in Angus cattle now that he and his research team have identified the genetic marker for the mutation and developed a test to find it.

Reecy, an associate professor in animal science, has spent six years working with researchers from Washington State University, the University of Nebraska and the University of Liege in Belgium, as well as cattle breeders in Washington, Michigan and Montana to collect the needed genetic material to identify the genetic mutation responsible for this form of dwarfism.

Long head dwarfism in Angus cattle has been a problem for producers for many years, and has been "in the gene pool probably for centuries," according to Reecy. It is a genetic mutation that affects bones in cattle that have growth plates, such as the legs. Bones in the head grow normally while leg bones don't develop as they should. Both the sire and dame need to have the mutation for the disease to affect the offspring.

"Back in the 1940s and '50s, dwarfism was a tremendous problem," says Reecy. "But another Iowa State researcher, Jay Lush, developed a method to identify bulls that carry genetic defects. It was a huge breakthrough. The problem is, there was no test for the females."

Lush's research helped lower the number of cases dramatically. After very few cases for many years, six calves were born as long head dwarfs in 2002 on a ranch in Washington state. The American Angus Association asked Reecy to investigate. Reecy and researchers Bishnu Kumar and James Koltes at Iowa State started collecting DNA from the Angus that fathered and mothered the dwarfs, as well as from all their ancestry that could be located. The process took six months.

Next, the group looked at genes in Angus cattle, and dwarfism in other cattle breeds and all mammals.

"Any information we could find, on any form of dwarfism, in any species, that people could say 'this was a causal mutation' we were trying to investigate," said Reecy.

Finally, the group found a paper on a dwarf mutation in rats that was similar to long head dwarfism in Angus cattle. The group then focused on specific portions of the DNA that they thought would be most helpful.

They found what they believed to be the causal mutation about two years ago. Since that time they have been proving their findings and developing a test for the mutation in the gene PRKG2.

Compared to the method developed by Lush, this new test allows producers to test -- easily and inexpensively -- for long head dwarfism in both males and females. But Reecy suspects the disease may not be eliminated right away.

"There's always a chance that producers will use the test for several years or so and when no one gets a case of [long head dwarfism], they might stop using it," said Reecy. "And low and behold in 10 years, some cow that never got tested will have a calf with long head dwarfism."

"Any information we could find, on any form of dwarfism, in any species, that people could say 'this was a causal mutation' we were trying to investigate."