The parents of a missing Iowa State University student are offering a reward of up to $10,000 for any new information that leads to the location of their son.

Jonathan (Jon) Lacina, a senior majoring in graphic design, has been missing since Jan. 22. His parents, Tom and Alesia Lacina, Grinnell, Iowa, announced the reward on Feb. 11.

The sum of $10,000 could be paid to a single individual or distributed among several people who supply information that leads officials to Jon Lacina, said Jerry Stewart, director of Iowa State's Department of Public Safety. (See details of the reward.)

If a reward no longer seems helpful to the investigation, the Lacina family will rescind the offer and close the two accounts. Funds that have not been used for the payment of rewards will be distributed to charities that support the arts, a cause characterized by the Lacinas as "near and dear to Jon and his family." 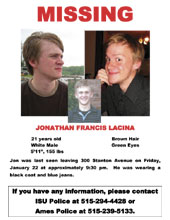 Download a PDF poster with photos and description of Jonathan Lacina.