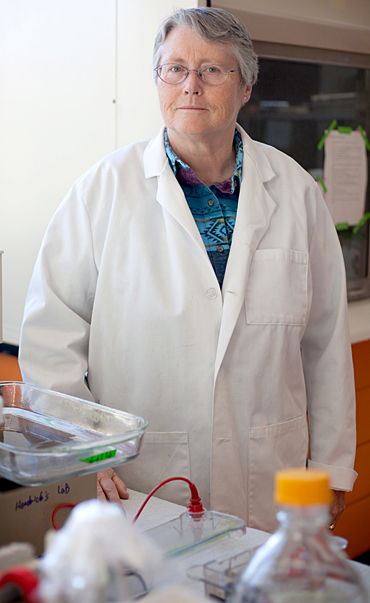 AMES, Iowa -- A new study from Iowa State University's Nutrition and Wellness Research Center (NWRC) may give men a way to combat high cholesterol without drugs -- if they don't mind sprinkling some flaxseed into their daily diet.

Suzanne Hendrich, an ISU professor in food science and human nutrition, led a study that examined the effects of flaxseed lignan in 90 people diagnosed with high cholesterol. The results showed that consuming at least 150 milligrams of flaxseed lignans per day (about three tablespoons) decreased cholesterol in men, but not women, by just under 10 percent over the three months that they were given the flaxseed.

While Hendrich admits that's considerably less than the expected outcome from cholesterol-lowering drugs -- approximately 10 to20 percent for three months, depending on the individual -- it's still enough to make flaxseed a more natural option for some men.

"Because there are people who can't take something like Lipitor, this could at least give you some of that cholesterol-lowering benefit," Hendrich said. "The other thing is, there are certainly some people who would prefer to not use a drug, but rather use foods to try to maintain their health. So this potentially would be something to consider."

According to the Centers for Disease Control and Prevention, about 17 percent of Americans suffer from high blood cholesterol -- a fat-like substance found in the body that can clog arteries and contribute to heart disease.

Hendrich developed the study with ISU master's student Kai Ling Kong and doctoral graduates Zhong Ye, Xianai Wu, and Sun-Ok Lee to determine whether the main lignan in flaxseed, secoisolariciresinol diglucoside, could lower cholesterol. They'll be presenting results of the research at the American Society for Nutrition's annual meeting at Experimental Biology 2010, April 24-28, in Anaheim, Calif. 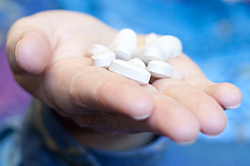 The study's 90 subjects -- which included twice as many men as women -- all had high cholesterol, but no other underlying health conditions. The participants were divided into three groups and were randomly assigned to daily consume tablets that contained zero, 150, or 300 milligrams of flaxseed lignans for 12 weeks.

It's the flaxseed lignans -- a group of chemical compounds found in plants that are known for their protective health effects -- that may help lower cholesterol, according to Hendrich. These compounds are converted to their bioactive forms by gut microbes. Hendrich reports that they made a healthy conversion in the subjects in this study, with no adverse health consequences.

No cholesterol-lowering effect in women

While the study found that the flaxseed lignans lowered cholesterol in men, it did not produce a significant change in women.

"We're really puzzled about that because we were looking at post menopausal women and these lignans are known as plant estrogens, so they have a very weak but measurable estrogen effect," Hendrich said. "So potentially, they would have a mild effect for substituting some estrogens in women. It's really hard to know why [there was no effect in women] and whether these substances are counteracting, possibly, some testosterone in men, which of course women don't have. It's definitely something we'd like to investigate further."

Hendrich reports the flaxseed lignan tablets used in this study are not currently available in the U.S. to her knowledge. In the absence of tablets, she says flaxseed can also be sprinkled on cereal, or added in a muffin mix or bread, although whole seeds are not very digestible. Ground flaxseed meal can also provide the desired cholesterol-lowering lignans, according to Hendrich, but it will oxidize over time and could potentially affect the flavor of the foods that it's in. She points out that the oxidation of the product also would diminish the flaxseed's omega-3 fatty acids, which can prevent heart attacks, so freshness is important in the product's impact.

The ISU researcher hopes to publish the study in a professional journal. She also plans further investigation on whether flaxseed can be taken in combination with other known cholesterol-lowering substances, and whether it could prevent high cholesterol in the first place.

A new study from Iowa State's Nutrition and Wellness Research Center study found that men who consumed at least 150 milligrams of flaxseed lignans per day decreased cholesterol by just under 10 percent over the three months that they were given the flaxseed.

"Because there are people who can't take something like Lipitor, this [flaxseed lignans] could at least give you some of that cholesterol-lowering benefit. The other thing is, there are certainly some people who would prefer to not use a drug, but rather use foods to try to maintain their health. So this potentially would be something to consider."