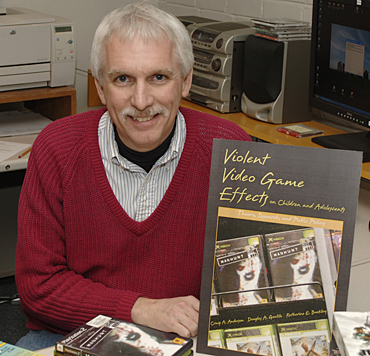 The study was published today in the March 2010 issue of the Psychological Bulletin, an American Psychological Association journal. It reports that exposure to violent video games is a causal risk factor for increased aggressive thoughts and behavior, and decreased empathy and prosocial behavior in youths.

"We can now say with utmost confidence that regardless of research method -- that is experimental, correlational, or longitudinal -- and regardless of the cultures tested in this study [East and West], you get the same effects," said Anderson, who is also director of Iowa State's Center for the Study of Violence. "And the effects are that exposure to violent video games increases the likelihood of aggressive behavior in both short-term and long-term contexts. Such exposure also increases aggressive thinking and aggressive affect, and decreases prosocial behavior."

The study was conducted by a team of eight researchers, including ISU psychology graduate students Edward Swing and Muniba Saleem; and Brad Bushman, a former Iowa State psychology professor who now is on the faculty at the University of Michigan. Also on the team were the top video game researchers from Japan - Akiko Shibuya from Keio University and Nobuko Ihori from Ochanomizu University - and Hannah Rothstein, a noted scholar on meta-analytic review from the City University of New York.

The team used meta-analytic procedures -- the statistical methods used to analyze and combine results from previous, related literature -- to test the effects of violent video game play on the behaviors, thoughts and feelings of the individuals, ranging from elementary school-aged children to college undergraduates.

"These are not huge effects -- not on the order of joining a gang vs. not joining a gang," said Anderson. "But these effects are also not trivial in size. It is one risk factor for future aggression and other sort of negative outcomes. And it's a risk factor that's easy for an individual parent to deal with -- at least, easier than changing most other known risk factors for aggression and violence, such as poverty or one's genetic structure."

The analysis found that violent video game effects are significant in both Eastern and Western cultures, in males and females, and in all age groups. Although there are good theoretical reasons to expect the long-term harmful effects to be higher in younger, pre-teen youths, there was only weak evidence of such age effects.

The researchers conclude that the study has important implications for public policy debates, including development and testing of potential intervention strategies designed to reduce the harmful effects of playing violent video games.

"From a public policy standpoint, it's time to get off the question of, 'Are there real and serious effects?' That's been answered and answered repeatedly," Anderson said. "It's now time to move on to a more constructive question like, 'How do we make it easier for parents -- within the limits of culture, society and law -- to provide a healthier childhood for their kids?'"

But Anderson knows it will take time for the creation and implementation of effective new policies. And until then, there is plenty parents can do to protect their kids at home.

"Just like your child's diet and the foods you have available for them to eat in the house, you should be able to control the content of the video games they have available to play in your home," he said. "And you should be able to explain to them why certain kinds of games are not allowed in the house -- conveying your own values. You should convey the message that one should always be looking for more constructive solutions to disagreements and conflict."

Anderson says the new study may be his last meta-analysis on violent video games because of its definitive findings. Largely because of his extensive work on violent video game effects, Anderson was chosen as one of the three 2010 American Psychological Association Distinguished Scientist Lecturers. He will give a lecture at October's New England Psychological Association (NEPA) meeting in Colchester, Vt.

"We can now say with utmost confidence that regardless of research method -- that is experimental, correlational, or longitudinal -- and regardless of the cultures tested in this study [East and West], you get the same effects. And the effects are that exposure to violent video games increases the likelihood of aggressive behavior in both short-term and long-term contexts. Such exposure also increases aggressive thinking and aggressive affect, and decreases prosocial behavior."