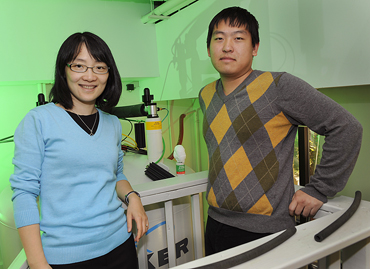 AMES, Iowa - The flu virus uses a shuttle mechanism to relay protons through a channel in a process necessary for the virus to infect a host cell, according to a research project led by Mei Hong of Iowa State University and the Ames Laboratory.

The findings are published in the Oct. 22 issue of the journal Science.

Hong, an Iowa State professor of chemistry and an associate of the U.S. Department of Energy's Ames Laboratory, said her research team used solid-state nuclear magnetic resonance (NMR) spectroscopy to determine the structure and workings of the proton channel that connects the flu virus to a healthy cell.

She said a full understanding of that mechanism could help medical researchers design drugs that stop protons from moving through the channel.

Hong and her research team - Fanghao Hu, an Iowa State doctoral student in chemistry; and Wenbin Luo, a former Iowa State doctoral student who is now a spectroscopist research associate at Penn State University - focused their attention on the structure and dynamics of the proton-selective amino acid residue, a histidine in the transmembrane part of the protein, to determine how the channel conducts protons. Their work was supported by grants from the National Science Foundation and the National Institutes of Health.

Two models had been proposed for the proton-conducting mechanism:

● A "shutter" channel that expands at the charged histidine because of electrostatic repulsion, thus allowing a continuous hydrogen-bonded water chain that takes protons into the virus.

● Or a "shuttle" model featuring histidine rings that rearrange their structure in some way to capture protons and relay them inside.

Hong's research team found that the histidine rings reorient by 45 degrees more than 50,000 times per second in the open state, but are immobile in the closed state. The energy barrier for the open-state ring motion agrees well with the energy barrier for proton conduction, which suggests that the M2 channel dynamically shuttles the protons into the virus. The chemists also found that the histidine residue forms multiple hydrogen bonds with water, which helps it to dissociate the extra proton.

"The histidine acts like a shuttle," Hong said. "It picks up a proton from the exterior and flips to let it get off to the interior."

The research not only provided atomic details of the proton-conducting apparatus of the flu virus, but also demonstrated the abilities of solid-state NMR.

"The structural information obtained here is largely invisible to conventional high-resolution techniques," the researchers wrote in their Science paper, "and demonstrates the ability of solid-state NMR to elucidate functionally important membrane protein dynamics and chemistry."

Chemists led by Mei Hong of Iowa State University and the Ames Laboratory have discovered the shuttle mechanism that relays protons from a healthy cell into a flu virus. The proton movement is an important part of the flu virus life cycle. The findings are published in the Oct. 22 issue of the journal Science.

"The histidine acts like a shuttle. It picks up a proton from the exterior and flips to let it get off to the interior."

Mei Hong, an Iowa State professor of chemistry and an associate of the U.S. Department of Energy's Ames Laboratory