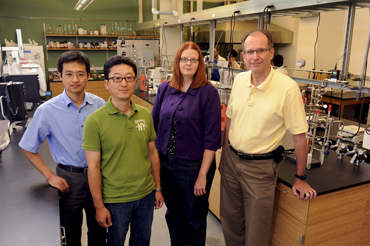 Some of the tubes looked like they were holding very weak coffee. That meant microorganisms - in this case, Shewanella bacteria - were growing and biochemically converting sugars into hydrocarbons, said Jarboe, an Iowa State assistant professor of chemical and biological engineering.

Some of the sugars in those test tubes were produced by the fast pyrolysis of biomass. That's a thermochemical process that quickly heats biomass (such as corn stalks and leaves) in the absence of oxygen to produce a liquid product known as bio-oil and a solid product called biochar. The bio-oil can be used to manufacture fuels and chemicals; the biochar can be used to enrich soil and remove greenhouse gases from the atmosphere.

Iowa State's Hybrid Processing Laboratory on the first floor of the new, state-built Biorenewables Research Laboratory is all about encouraging that unique mix of biochemical and thermochemical technologies. The goal is for biologists and engineers to use the lab's incubators, reactors, gas chromatography instruments and anaerobic chambers to find new and better ways to produce biorenewable fuels and chemicals.

"Biological processes occur well below the boiling point of water, while thermal processes are usually performed hundreds of degrees higher, which makes it hard to imagine how these processes can be combined," said Robert C. Brown, an Anson Marston Distinguished Professor in Engineering, the Gary and Donna Hoover Chair in Mechanical Engineering, and the Iowa Farm Bureau Director of Iowa State's Bioeconomy Institute.

"In fact, these differences in operating regimes represent one of the major advantages of hybrid processing," Brown said. "High temperatures readily break down biomass to substrates that can be fermented to desirable products."

Jarboe's research is one example. She's trying to develop bacteria that can grow and thrive in the chemicals and compounds that make up bio-oil. That way, they can ferment the sugars from bio-oil with greater efficiency and produce more biorenewable fuels or chemicals.

Another example of mixing the biochemical with the thermochemical is the work of Zhiyou Wen, an associate professor of food science and human nutrition, and Yanwen Shen, a doctoral student in his research group.

With support from the Iowa Energy Center, they're working to break down a bottleneck in the fermentation of synthesis gas - a mixture of carbon monoxide and hydrogen that's produced by the partial combustion of biomass in a gasifier. The fermentation process slows when researchers dissolve the gas into a liquid that can be used by microorganisms to produce biofuels. They're looking for bioreactor technologies that boost the mass transfer of the synthesis gas without adding energy costs.

A third example is the work of DongWon Choi, a former doctoral student and post-doctoral research associate at Iowa State who's now an assistant professor of biological and environmental sciences at Texas A&M University Commerce. He continues to collaborate in the hybrid lab by working with microalgae that convert carbon dioxide into oil that can be used to produce biofuels. His work is also supported by the Iowa Energy Center.

That oil is currently harvested with solvents or mechanical presses. Both processes produce a lot of waste and the resulting waste management problems. Choi is using pyrolysis technology to heat the algae and convert it into jet and diesel fuels without the waste.

And the researchers say the hybrid lab's mix of people, technologies, equipment and ideas is beginning to show results.

Yes, said Jarboe, "I think it is working well. This is a long process, but we're writing research proposals and papers. Everybody loves the idea of this hybrid approach. It has such a promising future; the challenge is in the collaboration."

The hybrid lab is starting to make the collaboration easier, though.

Brown said he's noticed the students who work in the hybrid lab seem to be comfortable crossing thermochemical and biochemical lines: "Just like children from different cultures often learn to communicate with one another more quickly than do their parents, graduate students seem to pick up cross disciplinary culture and language faster than their faculty advisers."

The Hybrid Processing Laboratory located just inside the front door of Iowa State University's new Biorenewables Research Laboratory is increasingly busy. It's a place where researchers in biochemical and thermochemical sciences work together to develop technologies that produce biorenewable fuels and chemicals. And it's a showcase for the multidisciplinary work promoted by Iowa State's Bioeconomy Institute.

"Biological processes occur well below the boiling point of water, while thermal processes are usually performed hundreds of degrees higher, which makes it hard to imagine how these processes can be combined. In fact, these differences in operating regimes represent one of the major advantages of hybrid processing. High temperatures readily break down biomass to substrates that can be fermented to desirable products."

Robert C. Brown, an Anson Marston Distinguished Professor in Engineering, the Gary and Donna Hoover Chair in Mechanical Engineering, and the Iowa Farm Bureau Director of the Bioeconomy Institute