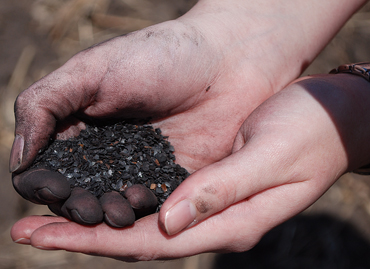 AMES, Iowa - A national panel led by Iowa State University engineers is launching an effort to research and develop technologies that capture, use and sequester carbon while enhancing food production, ecosystems, economic development and national security.

The 33-member National Panel for a Carbon Negative Economy recently met for the first time in Chicago. Participants represented universities, companies, federal agencies and non-governmental agencies, including the Massachusetts Institute of Technology, ConocoPhillips, the National Renewable Energy Laboratory and the International Biochar Initiative.

"Our goal is to help develop an intellectual framework for this new field and help move it forward," said Robert C. Brown, the leader of the carbon negative project, an Anson Marston Distinguished Professor in Engineering, the Gary and Donna Hoover Chair in Mechanical Engineering and the Iowa Farm Bureau Director of Iowa State's Bioeconomy Institute.

The panel meets at least twice a year with the next meeting scheduled for May 2012. Potential next steps include preparing a white paper detailing key aspects of a carbon negative economy, presenting the concept at professional conferences and in high-profile scientific journals, bringing the idea to federal agencies and private foundations, and continuing joint activities that strengthen the collaborations initiated at the first meeting of the national panel.

Iowa State's Initiative for a Carbon Negative Economy is one of three projects that each received three-year, $500,000 grants from the College of Engineering. The grants from the Dean's Research Initiatives program were announced in March and allow teams of faculty members to build interdisciplinary, public-private research partnerships that can successfully compete for multi-million dollar research projects while also sparking economic development and spinning off new technologies. The grant program is also supporting teams building partnerships and projects in computational biology and wind energy.

"This National Panel for a Carbon Negative Economy is a great example of the partnerships and research programs we're building with the Dean's Research Initiatives," said Jonathan Wickert, dean of Iowa State's College of Engineering. "These initiatives are advancing the college's research mission in areas where we have comparative advantages. And they're putting science and technology to work to help Iowa and the world meet the challenges of the 21st century."

One of those challenges is not only reducing emissions of greenhouse gases but also removing carbon dioxide from the atmosphere.

Brown and his colleagues think they have a solution: "Our proposal envisions a carbon negative economy, which goes beyond current efforts to reduce greenhouse gas emissions, by adopting a strategy of actively removing carbon dioxide from the atmosphere," says the project's proposal to the college. "This captured carbon is sequestered in soils, sediments, and oceans as part of the natural carbon cycle of the biosphere while supporting economic activities of human society."

The objective, in other words, is "to develop technologies that take carbon out of the atmosphere and make money while doing it," said Jill Euken, a member of the new panel and deputy director of industry and outreach for Iowa State's Bioeconomy Institute.

The initiative envisions fixing carbon from the atmosphere by growing cellulosic crops such as switchgrass and aquatic species such as microalgae. The harvested biomass would be thermochemically converted to a biocrude that can be used for transportation fuels, biobased chemicals or the generation of electricity. The thermochemical conversion also produces biochar, a carbon-rich solid similar to the charcoal produced in fires. Applying biochar to agricultural soils can sequester the carbon and boost soil fertility.

And now a national panel led by Iowa State engineers is working to advance that idea.

"The meeting helped the participants identify new opportunities for scholarship within and among our disciplines," Brown said. "But this is more than an academic exercise. The concept of carbon negative economic activity may be the only practical way to reverse the flux of carbon between the geosphere and the atmosphere."

Iowa State University researchers have established a national panel to research and develop technologies that take carbon out of the atmosphere and make money while doing it. The 33-member National Panel for a Carbon Negative Economy recently met for the first time. The effort is part of the Dean's Research Initiatives in the College of Engineering.

"Our goal is to help develop an intellectual framework for this new field and help move it forward."

The National Panel for a Carbon Negative Economy