AMES, Iowa -- When someone's trying to deceive you in a face-to-face exchange, you may be able to tell by their shifting eyes, fidgeting or perspiration. But what if the deception comes in text communication online and there are no physical cues to read?

Therein lies the problem, according to Joey George, an Iowa State University professor of management information systems who has been studying computer-mediated deceptive communication for more than a decade.

"How can we tell if people are being dishonest with us through email, or instant messaging, or the Internet, or any communication mode that's computer-mediated?" asked George, who is presenting research findings at a "Culture, Deception and Media" talk this Friday, Oct. 21, at Ohio University in Athens. "And the reason that we've moved into this area is that most of the research on deception has involved basically two people sitting face-to-face. We know a lot about that mode, but we don't know a lot about what happens when we're communicating via email or some other computer-mediated mode."

According to George, previous research has found that people are not very good at detecting online deception. It's often easier to detect a lie in person.

"When you lie, it's a very difficult thing to do, and of course it gets more difficult as the stakes get higher," said George, who is also the DeVries Chair in Business in ISU's College of Business. "But it gets so difficult that you can't control every aspect of it. That's because you've got to develop the message, you've got to control the pitch and tone of your voice and any nervousness you might feel, you've got to control your body language and movements. And so the theory is it's so difficult to do all that and make it look natural that certain cues sort of 'leak,' which is the word researchers use. You give off certain indicators that someone who's savvy can pick up and figure out that you're lying."

Part of a five-year, multi-university study

In a five-year, multi-university study (2001-06) funded by the U.S. Air Force, George and his fellow researchers studied some 2,000 subjects -- 500 business people and 1,500 Florida State University students -- and their detection of deception through video, audio and text computer-mediated communication. George says text communication was found to be the most difficult mode in which to detect deception, but not significantly.

"The worst of all should be text, because it's just the words," he said. "And we do know there are certain patterns in text and language that indicate deception. But still, in terms of the total number of cues, text should be very, very hard because there just aren't as many cues. But we're not finding those differences, and we think that's because people now know how to lie in this context.

"Lying is really common and people learn how to do it at an early age in a natural person-to-person setting," he continued. "But computer-mediated communication is a more recent thing and people are just now, we think, becoming more and more acclimated with both lying over the media, and detecting lies that way."

Their study confirmed previous research findings that indicate people lie about 20 to 25 percent of the time during any given day. George says most of it is for altruistic, more innocent reasons -- "just to keep the social machine running smoothly."

The researchers also surveyed students and business professionals in their study to determine if they had to lie, what form of communication would they choose. They overwhelmingly chose face-to-face communication.

"I guess that's intuitive, because of course, then you can be really watchful of the person you're communicating with and look for signs of suspicion," George said. "You can make sure that your message is getting across and they're not getting suspicious of what you're telling them."

The team's ongoing research continues to study how cultural differences play into a person's detection of computer-mediated deception. They've found that people are better at finding deception in communication from cultures other than their own. George presented some of those findings last summer as the keynote speaker at the International Conference on Information Systems and Technology Management in São Paolo, Brazil.

The researchers have already published 13 studies in professional journals, and George says they have some new studies currently under review. 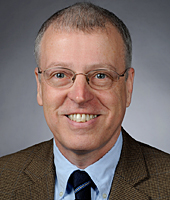 Joey George, an ISU professor of management information systems, has been studying computer-mediated deceptive communication for more than a decade. He will be presenting research findings at a "Culture, Deception and Media" talk this Friday, Oct. 21, at Ohio University in Athens. George previously participated in a five-year, multi-university study (2001-06) funded by the U.S. Air Force.