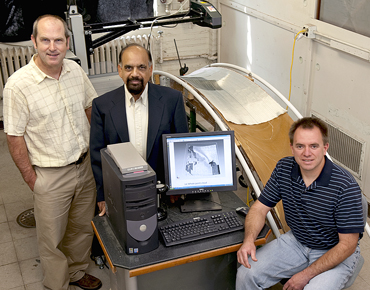 A computer took the laser readings and calculated how dozens of the layers would fit and flow over the curves of a mold used to manufacture a blade. And if there was a wrinkle or wave in the fabric - any defect at all - the technology was designed to find it.

That's because the last thing you want is a defect in a 40-meter wind turbine blade when it's spinning in the wind.

"Waves in the fabric are bad because they can't take the load," said Vinay Dayal, an Iowa State associate professor of aerospace engineering.

"And if a blade can't take the load, bad things happen to the turbine," said John Jackman, an Iowa State associate professor of industrial and manufacturing systems engineering.

The lab has been open for about a year and was built as part of a three-year, $6.3 million research project. The study is a joint effort of researchers from TPI Composites, a Scottsdale, Ariz.-based company that operates a turbine blade factory in Newton, and the U.S. Department of Energy's Sandia National Laboratories in Albuquerque, N.M. The researchers' goal is to develop new, low-cost manufacturing systems that could improve the productivity of turbine blade factories by as much as 35 percent.

The lab in Iowa State's Sweeney Hall provides researchers the facilities and equipment they need to:

Dayal said one example of the lab's capabilities is the ultrasound equipment that allows researchers to measure whether there's enough glue to hold the two halves of a turbine blade together - all without cutting into the blades.

Peters said the lab can help meet that goal by developing better, more efficient manufacturing methods. The result could be bigger, longer-lasting wind turbine blades. And that could mean more power at less cost.

"Manufacturing in this industry is done largely by hand," Peters said. "Our goal is to find ways to automate the manufacturing."

Working with the four faculty researchers are Wade Johanns, Luke Schlangen, Huiyi Zhang and Siqi Zhu, graduate students in industrial and manufacturing systems engineering; and Sunil Chakrapani, a graduate student in aerospace engineering. Funding for the lab has been provided by TPI, the U.S. Department of Energy and the Iowa Office of Energy Independence. Other lab partners include the Iowa Alliance for Wind Innovation and Novel Development and Iowa State's Center for Industrial Research and Service.

Researchers say the lab has already advanced their understanding of turbine blade manufacturing and is helping to develop automation technologies that could one day be used in manufacturing plants.

"In the early stages of the research there were a lot of investigations to understand all the problems we're addressing," Frank said. "But now we're at that phase where real intellectual property is coming out of the lab."

"Manufacturing in this industry is done largely by hand. Our goal is to find ways to automate the manufacturing."

"In the early stages of the research there were a lot of investigations to understand all the problems we're addressing. But now we're at that phase where real intellectual property is coming out of the lab."