Iowa State astronomer: Beware of the wildlife, even in apparently quiet galaxies 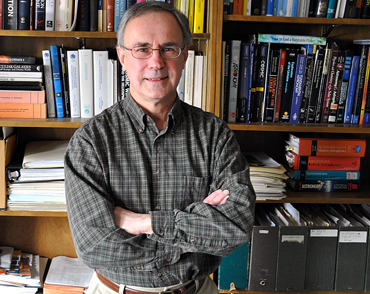 Iowa State's Curtis Struck has studied galaxies for 30 years and earlier this year published a book about galaxy collisions. Photo by Steve Jones/College of Liberal Arts and Sciences. Larger photo.

Iowa State astronomer: Beware of the wildlife, even in apparently quiet galaxies

AMES, Iowa - Even though a dwarf galaxy clear across the Milky Way looks to be a mouse, it may have once been a bear that slashed through the Milky Way and created the galaxy's spiral arms, writes an Iowa State University astronomer in the journal Nature.

Curtis Struck, an Iowa State professor of physics and astronomy, uses a News & Views commentary in the Sept. 15 issue of Nature to add context and color to a study published in the same issue by a research team led by Chris W. Purcell of the University of Pittsburgh.

The Purcell group reports that the Sagittarius Dwarf Elliptical Galaxy collided with the Milky Way, creating the galaxy's spiral arms, its central bar structure and the flaring at its outer disk. Along the way, the dwarf galaxy's stars were scattered and the galaxy shrunk to an object that's so small and unimpressive it's hard to see.

The Purcell group writes that dwarf galaxies such as the Sagittarius originally had massive amounts of dark matter. The original galaxy, in other words, may have been 100,000 times more massive than it is today. And that may have given it the power to shape our galaxy.

Struck has studied galaxies for 30 years and focuses his research on galactic collisions. His book, "Galaxy Collisions: Forging New Worlds from Cosmic Crashes," was published earlier this year. (Struck will discuss the book at 3 p.m. Wednesday, Oct. 26, in Room 192 of Iowa State's Parks Library.)

In his Nature commentary, Struck said the Sagittarius paper gives astronomers new ideas to study. Among them: Maybe the evolution of our Milky Way galaxy did include collisions and wasn't as peaceful as astronomers had thought. And, even though these dwarf galaxies are dim and difficult to detect, the effects of their collisions with bigger galaxies may be widespread across the universe.

Struck also writes that the estimated range of the size of Sagittarius in its original form is likely to be the subject of study and contention. He notes the estimates at the smaller end of the range indicate the dwarf galaxy would have smaller, but still significant, impacts on the Milky Way.

That means a galactic mouse could have once been a bear that's "been messing things up for some time," Struck wrote. And so, he warned, "Beware of the wildlife, even in apparently quiet galaxies."

Iowa State's Curtis Struck wrote a News & Views commentary -- "Astrophysics: Rough times in the Galactic countryside" -- published in the Sept. 15 issue of the journal Nature. Struck's paper provided context and color to a study that suggests the Milky Way's past may not have been as peaceful as astronomers thought.

But just at the time of year when it is nice to go out to a dark site and view the glorious and peaceful Milky Way, Purcell et al. alert us to a prowler in the galactic house -- and evidence that it's been messing things up for some time.

Curtis Struck, an Iowa State professor of physics and astronomy, writing in a News & Views commentary in the Sept. 15 issue of the journal Nature