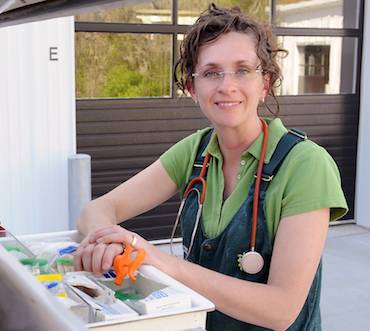 AMES, Iowa -- A lot can happen in a period of five years. Just ask Sarah Myers.

Myers graduated from Iowa State University in May 2007 with a bachelor's degree in microbiology. She married, started veterinary medicine school, gave birth to a son, cared for her mother during chemo, was diagnosed with ovarian cancer, had surgery, underwent chemo, was cared for by her mother, was diagnosed with thyroid cancer, attended her mother's funeral, had surgery, continued school, gave birth to a daughter, had a recurrence of thyroid cancer, that doctors feared had spread to her lungs, wrote love letters to her children, passed her veterinary medicine boards, had another surgery and completed school.

On Saturday, Myers receives her Doctor of Veterinary Medicine degree from Iowa State.

Although this may read like a synopsis for a made-for-TV movie, it is not. It all happened, To Sarah Myers. Before her 29th birthday. And it didn't break her.

"I could sit in a pile and cry, if I let myself," she admitted.

But Myers is her mother's daughter. No whining, no hiding under the covers, no pity parties. Her "rugged and strong" mother never quit anything. And that determination passed on to her daughter.

"I was in my mother's kitchen right after my first two rounds of chemo," Myers remembered. "I felt so sick - the chemo was just terrible. I was crying and told my mom to take me to the ER."

Diane Wagenaar would have none of that.

"She grabbed me by my shoulders and said, 'you need to be stronger than this or you're not going to make it and that's the truth of it. You just need to put on your big girl panties for this one,' she told me."

Myers knew her mother was right.

"That was the best advice she could've given me. You just have to pick yourself up and do it," she said.

Taking care of each other

It was 2008. Son Paden was 16 weeks old, and Myers was beginning her second year in veterinary school, when she got the news. Her mother's uterine cancer from 2003 had reappeared. It was in her hip. Myers was devastated.

"Everyone in the veterinary medicine college was just great," she said. "After many talks, Dr. Lisa Nolan (an associate dean then) told me to go and be with my mother, they'd save my spot in the college."

While caring for her mother in Cedar Rapids, Myers began to experience symptoms of pregnancy. An ultrasound showed one ovary was extremely enlarged. She wasn't pregnant, but she needed surgery immediately. The surgery revealed a "very metastatic type of ovarian cancer." That was May 7, 2009.

Myers started chemotherapy three weeks later at University of Iowa Hospitals and Clinics in Iowa City, where her mom was being treated. Myers and her son stayed with her parents in Cedar Rapids while undergoing three rounds of chemo.

Myers recalls that Paden was "still in the Pack 'N Play" during her first round of chemo. By the second round, he was walking, and "didn't want anything to do with that Pack 'N Play." Myers' mother took Paden on daily walks around the hospital.

"No one could have expected this at all. It was a freak thing," she said. "It was a second unrelated cancer. And, it was a significant cancer because it was so large."

Myers completed her third round of chemo for the ovarian cancer before having thyroid cancer surgery.

"My mom was back in the hospital during my last round of chemo," Myers recalls. "I toddled with my pole down a floor to her room. We did puzzles together. I'm so grateful we had that time together."

Three days after the surgery, Myers was back in school. Again she has her mother to thank.

"I don't know how I did it," she said. "I just wanted to stop (school). My husband was supportive of whatever I chose to do. 'Whatever makes you happy. If you want to stop right now, you stop,' he told me."

But her mother was "not so easy."

"When my mother entered hospice that September, her goal was to see me graduate," Myers said. "I think she knew it wasn't going to happen, but she said that's what she really wanted. I knew I couldn't let her down."

A month later, her mother lost her battle with cancer. Yet Myers put "one foot in front of the other" to endure the intense 12-hour days of class and studying that vet med school demands.

A blessing and a curse

Sarah and Jacob Myers wanted another child. They were told there were no studies on the safety or success of a pregnancy after ovarian cancer. Most women have complete hysterectomies, but Myers - because of her age - had only the cancerous ovary removed. The Myers's were told they could try a year after completion of the chemo. But there was no guarantee. 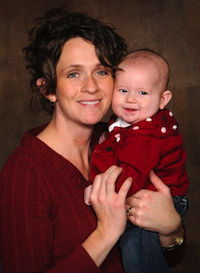 Myers and Clara. Photo by Tekippe.

Because pregnancy hormones masked her ovarian cancer tumor markers, Myers couldn't be tested during pregnancy. If cancer returned during those nine months, there was no way to track it. She tested after Clara's birth.

She went to Mayo Clinic in Rochester. They found "spots" on her neck. And in her lungs.

The worst of times

Three times Myers has been told she had cancer.

"Every time I just grab my chair and say, here we go again," she said. "Whatever happens, I'm going to get through it. God never gives you more than you can handle."

It was October 2011. Her daughter was only five months old.

Somehow ("I don't know what I was thinking."), Myers passed the national veterinary medicine licensing exams on Friday, Nov. 18. On Monday, she had surgery on her neck and lung. That evening, she received some long overdue good news.

The spots in her lungs weren't from cancer, but from a non-life threatening fungal infection, called histoplasmosis.

"It was a miracle," she said. "I had so many people praying for me."

Now, Myers has options. She applied for a residency in ISU's College of Veterinary Medicine. Or, she may open a veterinary clinic near her family's farm in Maxwell. 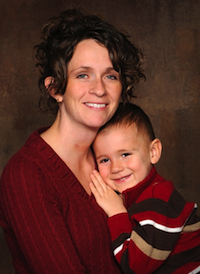 Myers and Paden. Photo by Tekippe.

And she definitely wants to fill a void for parents who have young children and face terminal cancer.

"It's such a hard time. There's nothing out there to help you tell your children. That's one thing I really want to do - write a book for parents to share with their kids," she said

"We hadn't told my son anything when I got my diagnosis at Mayo - we wanted to wait until after the surgery - but he heard people talking," she said. "And to this day, he gives me a big hug in the morning and says, 'Mommy, I don't want you to die.' How do you tell your four-year old that you're not going to die?"

Myers refers to Paden and Clara as "our great little people." She regrets they won't know their grandmother.

"But they'll know her through me. She was a tough woman, that's for sure."

After entering the College of Veterinary Medicine in 2007, Sarah Myers lost her mother to cancer while battling cancer herself. Three years later -- following the birth of her second child -- an unrelated cancer appeared. Heeding her own mother's advice to "be stronger," Myers completed her veterinary medicine studies and will earn her DVM on Saturday. 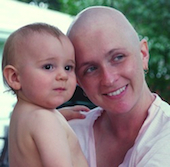 Myers and son Paden during chemo in 2008.

"She grabbed me by my shoulders and said, 'you need to be stronger than this or you're not going to make it and that's the truth of it. You just need to put on your big girl panties for this one,' she told me."